Rogueliking without the need for a thousand-page guidebook 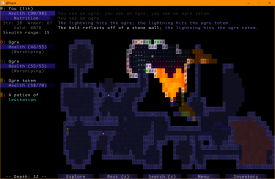 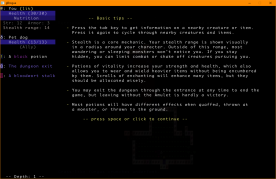 gBrogue is a roguelike game and a variant of Brogue🗗. It’s in continual development, but versions posted here are considered stable. The github repository can be found here🗗.

Special thanks to the Brogue community for support, testing, ideas, suggestions, and critique; and to Tom Ford for making gB playable online.

The “roguelike” is a game genre mostly revolving around navigating randomly-generated dungeons, knocking off (or getting around) baddies, and gathering items (such as weapons, potions, and wands) along the way.

But death is often part of the fun. Each playthrough gives you a totally different experience.

The granddaddy of them all, Rogue🗗, was developed way back in the day, and it has spawned and inspired countless games. Among the most popular are NetHack🗗, Ancient Domains of Mystery (ADOM)🗗, and Dungeon Crawl: Stone Soup🗗.

But Brogue🗗 stands out in that it’s challenging yet extremely easy to pick up and play. While you might have to find some “spoiler” guides for most roguelikes in order to actually be able to play them, Brogue doesn’t need one. See, Brogue is especially unique in that there is a lot of information at your fingertips that you have to work with when you make decisions. For example, you can read descriptions of items and monsters at any time, and you can even get some stats on how many strikes you might have to land to kill a monster.

In short, roguelikes are strategic by nature, and Brogue stands out by playing to that strength.

The levels are randomly designed, but they are less maze-like and more open than most other roguelikes’ levels. They’re also beautiful. See some Brogue gameplay (which is, of course, similar to gBrogue’s gameplay) here:

gBrogue is my variant of Brogue, currently in development.

Based on Brogue version 1.4.7, gBrogue uses Brogue as a base and makes several enhancements. It’s designed in large part to crank Brogue’s particular advantages up to 11.

Here are some core tweaks to the Brogue design philosophy that makes gBrogue gBrogue.

Item use and management

Most roguelikes, including Brogue, randomize the functions of certain items every time you play. A blue potion in one playthrough might heal you when you drink it, while a blue potion in the next playthrough might set the ground on fire when you toss it. In the first case, it’s of course better to drink the potion than to throw it at an enemy, and, of course, vice versa for the second. But this can make it difficult to know which items to find and lug around, and it may make you hesitant to try them out. It incentivizes more “hoarding” and less “doing.” A bit of mystery is alluring, but too much is frustrating.

In Brogue specifically, throwing certain kinds of potions simply “splashes some liquid around,” still leaving you with no idea what your wasted potion actually does. In gBrogue, attempting to drink a potion will do something (either good or bad!), but throwing almost any potion will almost always do something as well. For example, drinking a potion of invisibility will make you temporarily invisible, while tossing that same potion at some spot on the ground will permanently render some area darker, giving you a hiding spot when pursued. Either way, whether you throw or drink a green potion that happens to be a potion of invisibility.. you’ll know that all green potions are potions of invisibility. (And Brogue/gBrogue keeps track of this for you, so no need to check a spoiler guide to figure this out!)

gBrogue’s potions of empowerment combine these two, but with another twist. They always grant you another point of strength. They’ll increase your maximum health, which allows you to take even more smacks from monsters or magical blasts to the face. But of course, you could always throw it at an ally, which will make him/her/it stronger and allow it to learn a new skill.

Same with, say, potions of telepathy. True to its name, just as in Brogue, drinking one will make you temporarily able to spot monsters’ positions. In gBrogue, though, tossing one will reveal a part of the map around the point of impact.

…though not so many as to take away from the simplicity and elegance of the original game.

Toss a potion of hallucination to cause discord: having monsters fight one another. Use an identification charm to find out what that blue potion is before you decide to drink, throw, or even keep it. Flail around those nunchaku while wearing a cloak of shadows, bashing that goblin thief‘s skull in before he has a chance to spot you.

More information at the ready

Brogue generally does a fantastic job telling you what you need to know. gBrogue expands on this. For example, you’re explicitly warned when a sleeping or wandering enemy spots you and begins pursuit, and you’re given more information on them.

The “general store” on very first floor will help you choose the “tone” for the rest of your playthrough. It may hold 3-5 items and/or potential allies in cages, but only 1-2 keys. You could choose to start the game with an ally or two and spend some of your resources beef them up and join by your side, and/or choose a few items that will help you smash or avoid monsters.

The goal of Rogue, Brogue, and gBrogue is to get to the 26th floor, retrieve the artifact known as Amulet of Yendor, and climb back to the first floor and out the entry door to win. As another example of versatility, gBrogue offers you the chance to leave the dungeon via the entryway on the first floor without the amulet in hand. Although this doesn’t really count as a “win,” it’s another way to end the game without quitting or dying in the middle of an adventure; you can choose gather other treasures and gold and make it back to the surface. The high score table will mark that playthrough as having “abandoned your quest” rather than simply “quit.” So.. you have a chance to “save face.”